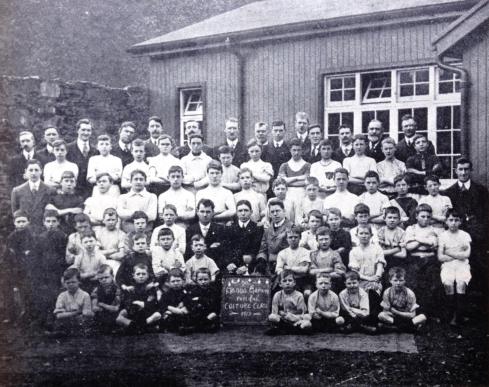 A Fianna Eireann physical culture class at the Fianna Hall in Barrington Street, in Limerick City, 1913.

This hall was a purpose built hall donated by Fenian John Daly in 1912. Bulmer Hobson officially opened the hall at a ceremony on December 13, 1912. The hall was used as a classroom, drill hall and also as a gymnasium.

The hall played host to many prominent republicans over the years. Patrick Pearse, Sean MacDermott, Roger Casement, Terence MacSwiney and many others gave speeches at this significant Limerick address.

The hall, which was also used by the Irish Volunteers and Cumann na mBan at various stages, was burned down by the Black and Tans on 29th November, 1920, during the War of Independence.

This entry was posted on Thursday, February 27th, 2014 at 11:21 am and posted in Fianna articles archives. You can follow any responses to this entry through the RSS 2.0 feed.
« Na Fianna Eireann in Gorey, Co. Wexford
“Unionists Demand Suppression” »