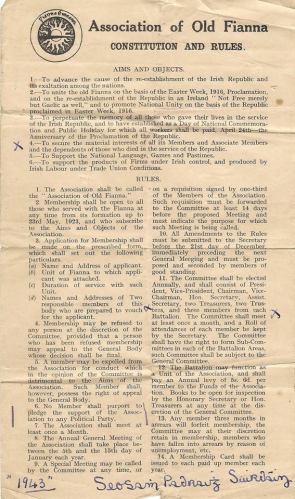 “Association of Old Fianna Constitution and Rules’ signed by former committee member and Fianna veteran Joseph Patrick Jordan. The National Association of Old Fianna was established in 1934 as a means to bring together old comrades from both sides of the Civil War divide. It also strived to honour and remember dead Fianna members who had died during, and after, the revolution years. Committee member Mr. Gabriel O’Brien said that the main aims of the association were the “attainment of the national objective based on the 1916 Proclamation, the welfare of its members, the promotion of national culture and games, and the defeat of imperialism”. Eamon Martin said later that “friendships born and cemented in the ranks of Fianna Eireann were continued through the National Association of Old Fianna”.

This entry was posted on Thursday, October 16th, 2014 at 9:51 am and posted in Fianna articles archives. You can follow any responses to this entry through the RSS 2.0 feed.
« ‘Irish Advanced Nationalism & Youth in the Early Twentieth Century’ by Dr. Marnie Hay
Fianna Training Camp, Portmarnock, 1918 »