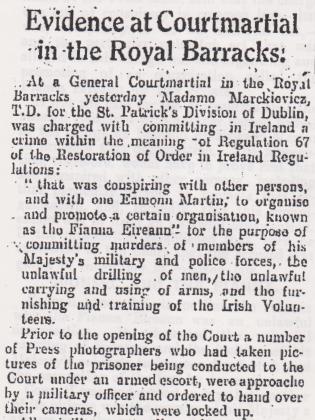 On 2nd December 1920, Countess Markievicz was court-martialed by the British administration. She had been held in Mountjoy since her arrest at Rathmines on 26th September. The proceedings took place at the Royal Barracks (now Collins Barracks).

Her close friends Dr. Kathleen Lynn, Maud Gonne MacBride and Hanna Sheehy-Skeffington were permitted to attend but under strict conditions.

Markievicz was charged with conspiring to ‘organize and promote’ Fianna Eireann for the purposes of ‘committing murders of military and police; the drilling of men; the carrying and using arms; and the training [of recruits] for the Irish Volunteers’.

When asked to plead guilty or not guilty, Markievicz replied:
“I do not recognize this court. It is not constituted legally, not being based on the authority and will of the people of Ireland but on the armed force of the enemies of the Irish Republic”.

A plea of not guilty was then formally entered.

The prosecution outlined the reasons why Fianna Eireann was such an unlawful organization:
“It advocated the unlawful carrying of firearms and the inciting of His Majesty’s subjects to become disaffected, and the preventing of the law of force by arms. Its objective was the murder of His Majesty’s officers, and the furnishing of recruits for the Irish Volunteers, which was unquestionably in itself an unlawful organization.”

The trial lasted two days and she was found guilty of all charges. She was sent back to Mountjoy to await sentencing.

Five days later she wrote a letter to her sister Eve:
“I suppose now I can tell you that I was tried by court-martial for conspiracy, and that the conspiracy was the Boy Scouts. They have not made up their mind what to do with me. I think they dislike me more than most. The whole thing is Gilbertian, for we have carried on for eleven years. Anyhow it is a fresh ‘ad’ for the boys!”

When she was eventually sentenced in the New Year to two years hard labour, she wrote again to Eve and remarked that it was “amusing to see that for starting the Boy Scouts in England, Baden Powell was made a Baronet! I bet he did not work as hard as I did!”

This entry was posted on Tuesday, December 2nd, 2014 at 10:06 am and posted in Fianna articles archives. You can follow any responses to this entry through the RSS 2.0 feed.
« ‘Fianna Eireann in Cork City’ by Charles Meaney
Fianna Eireann and the British Navy Recruiting Banner at the GPO, 1918 »